After Apple released the final beta version of macOS 10.14 (Mojave), we have installed and tested this pre-release version.

In addition to displaying the interface in a dark appearance, the most important change from our point of view is that access without consent has been further restricted.

This concerns e.g. both the internal camera and the microphone (only nessViewer if video recording will be opened) as well as access to folders such as the pictures & movies folder.

In addition, the control of other applications (via AppleEvents or ScriptingBridge) is now only possible after approval.
The approval can be viewed in the system preferences “Security” and there in the tab “Privacy” and deactivated if necessary. 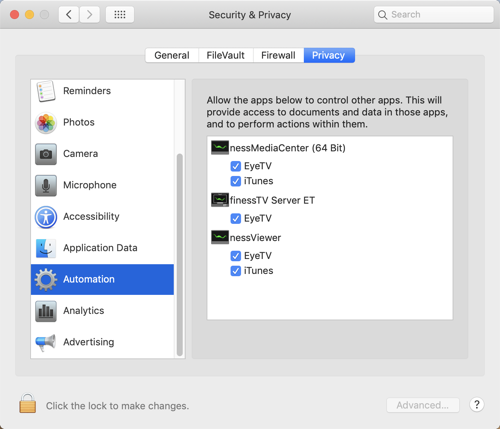 Another change is that 32 bit applications now display a message indicating that the application will no longer be supported in the future and the installation of the 64 bit version is recommended.

But since – at least we had to note that in the pre-release version – the approval for the control of other applications does not seem to be displayed in the 32 bit version and thus the control does not work (e.g. the iTunes control), we recommend the 64 bit version the latest with macOS 10.14.

Incidentally, we unfortunately also had to note that, at least in the pre-release version of macOS 10.14, the approvals also do not work properly if the applications support the dark appearance.
Although the 64 bit versions are prepared for the dark appearance, for the time being it will not be supported (until this hopefully has been fixed).

Addendum: 5 month after the release of macOS 10.14, all system and XCode bugs could be resolved with Apple.