After the DLNA bug fix for the support of miniDLNA (middle of December) we continued to work on the improvements in this version to extend the access to miniDLNA and to use nessViewer as an iCloud alternative in better way.

In addition to minor improvements in accessing miniDLNA (date and duration of videos in a more readable form, preview of movies), the access of DLNA media servers outside the local network is now also possible via VPN.

Normally this access via VPN is not possible because the DLNA media server is not found even with the VPN connection. Therefore, in addition to the TCP/IP address (and port), the name of the info file can now be specified in the nessViewer App settings – with these two details, direct access is also possible via VPN. 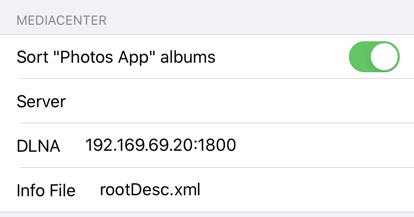 These two details are filled in automatically by nessViewer App – it is sufficient to enter a unique part of the TCP/IP address (e.g. “.20:”) at “DLNA” in the settings and then to access with the MediaCenter the DLNA media server in the local network.

When transferring files, not only the selected file can now be transferred, but also all files in a folder.

In addition, all files in a folder can now be deleted (via the action menu) after “Open File” has been selected. 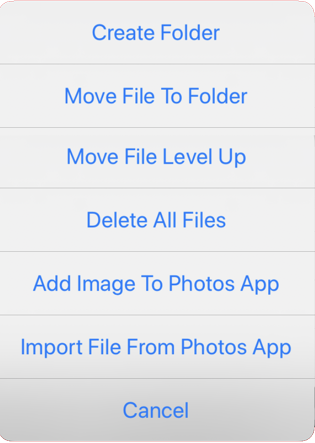 There is a PDF document describing nessViewer as an iCloud alternative in German from 2012. Except for the improvements described here (and of course minor visual changes), it is still up to date.

After we intensively tested miniDLNA, installed on the Raspberry Pi, we noticed a few things that were not so optimally.

In addition, a preview is now displayed for videos. We have read the opportunity to create a cover for each video and to change the miniDLNA configuration. But that is too complex for us with so many videos.
However, the video preview may take 1-3 seconds to display – depending on the video.

And in general, the automatic selection did not work correctly with DLNA (both after selecting a menu entry and after returning to a higher level) – which has now been corrected.

We have been informed by Dennis that nessMediaCenter App for AppleTV can not access miniDLNA installed on the Raspberry Pi. So far, miniDLNA has not been specified as supported DLNA / UPnP media server, but Raspberry Pi is an interesting solution because of the low price.

We have therefore extended the code so that it is now checked again in the asynchronous call whether media can be accessed. With this extension the media of miniDLNA can now be accessed.

So far, we had been waiting with the updates for macOS 15, because unfortunately (again this time) Apple has not reacted to our bug report. And through this bug, the access to the media of the Photos App fails with macOS 15. Unfortunately, this bug was not fixed even with macOS 15.1, but since Apple made this update now generally available, we have no other choice. As with macOS 14, we hope that Apple will find time as soon as possible – and will not need 1/2 year as last time.

The most important adaptation is the playback of the music and protected movies through the MediaCenter. While macOS 10.14 or earlier uses iTunes for this playback, macOS 10.15 uses the Music App for music playback (Music App Control) and the TV app for playing protected movies.

In addition, we have newly developed the access to the media of the Photos App. Previously, these media and their structure were read directly from the database – but since this is no longer possible under macOS 10.15, the system framework “MLMediaLibrary” is now used instead.
This works very well for macOS 14 or older, but unfortunately, as already said, not yet on macOS 15.

Version 3.9.1 now officially supports some new features that have been added in version 3.9 in recent months.

The HEIC image format e.g. is now officially supported (if the macOS version supports it).

Several movies can be selected in the media show and then combined via contextual menu (by right-clicking on one of the movies). The new movie will then be opened in the movie editor for editing.

Rotated movies (such as iPhone recordings in landscape format) are now properly rotated in the media server before streaming.

If the Apple mediafilesegmenter is installed, it will now be checked in the media server if the selected movie can be segmented in a short time before using it – and otherwise VLC or ffmpeg is used. On slow computers or hard disks, the number of maximum segments is corrected and then taken into account if the mediafilesegmenter is segmenting too slowly.

Under macOS 10.15 (Catalina) ffmpeg can not be used at the moment because only notarized “applications” can be started. Therefore ffmpeg is now not used under Catalina until Apple has also found a solution for this.

We will continue to test macOS 10.15 and make adjustments if necessary. But there are again (as with macOS 10.14) various problems with the access rights to the “Photos App” and the control of other applications via AppleScript. We can only hope that this time Apple will not need again almost half a year after the official macOS release to fix these bugs.